When Two Worlds Collide: The Dangerous Intersection of Diabetes and Eating Disorders 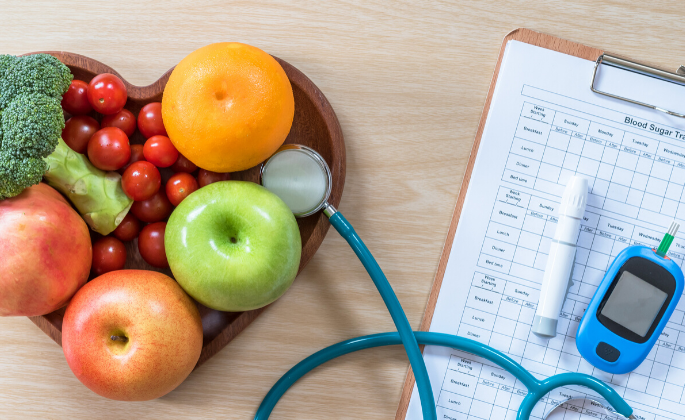 According to the Centers for Disease Control (CDC), approximately 22 million individuals are living with either Type 1 or Type 2 diabetes. These individuals are also at significantly higher risk for eating disorders. When this dual diagnosis exists, treatment and recovery are often complicated by the complexity and conflicting demands of the two conditions.

Although the approach to treatment can vary among those with Type 1 (DMT1), Type 2 (DMT2), and latent autoimmune diabetes in adults (LADA), it is important to be aware of the increased risk these individuals carry for disordered eating and eating disorders. It is estimated that the risk for ED behaviors is three times higher in individuals with DMT1 (1) and that up to 40% of individuals with DMT2 are affected by ED behaviors (2). There are numerous factors that increase the risk for disordered eating for those with diabetes. Several common challenges include:

1. Hyper-focus on food and eating. Individuals with diabetes learn the necessity of paying close attention to every aspect of their food, eating patterns, and activity. While this promotes effective diabetes management it can also create an environment that puts people at risk for disordered eating/eating disorders. People may restrict their intake in an effort to minimize effects on blood glucose, while others might struggle with covert bingeing on foods they were told to avoid out of a sense of deprivation. Carbohydrate counting can result in obsessive behaviors as well as limit both food choices and restrict eating in situations where it is difficult or impossible to accurately assess the carbohydrate content at a meal. Additionally, having diabetes often means that everyone has an interest or opinion about every aspect of one’s food and eating.

2. Diabetes Stigma. Over 75% of individuals with diabetes report experiencing some type of diabetes stigma (3). This includes having diabetes looked at as a character flaw, or individuals feeling like they are a burden on the health care system. This stigma can cause individuals to not engage in routine diabetes care such as blood glucose monitoring or injections due to negative comments and attitudes they encounter. The increasing use of wearable devices such as blood glucose monitors and insulin pumps create unwanted and unsolicited comments and violation of personal space and physical touch. The public and health professionals frequently call an individual’s physical appearance into question, whether it’s body weight, shape, or size. People often engage in unhealthy weight control dieting in an effort to avoid the perception that they somehow “caused” their diabetes.

3. Manipulation of insulin. It is estimated that between 10-47% of individuals manipulate their insulin (4). So-called “Diabulimia” refers to a method of “purging” through intentionally creating a condition where blood glucose is not absorbed in the body, resulting in decreased energy intake and weight loss. This can occur by either omitting or reducing the amount of insulin taken or by rendering the insulin ineffective. It needs to be recognized that Diabulimia can lead people to assume that bulimia is the only ED that presents in individuals with DMT1, though clearly there is a risk for anorexia, binge eating disorder, and other diagnoses as well.

If you are an individual with diabetes and suspect that you might be experiencing some disordered tendencies or if you are a healthcare professional working with individuals with diabetes, it is important to recognize and address eating disordered behaviors and causes. Referring to an individual or organization that specializes in eating disorder treatment is often necessary to allow for the multidisciplinary treatment needed. If you’d like to refer to The Emily Program, please give us a call at 1-888-364-5977.

Hilmar Wagner is a Registered Dietitian/Nutritionist (RDN) and Certified Dietitian (CD) in the state of Washington. Hilmar joined the Emily Program in 2006, and currently serves as the Training Coordinator for Nutrition Services and Clinical Outreach Specialist. In this role he initiates and coordinates training of new dietetic staff, dietetic interns and continuing education for nutrition services for all Emily Program locations. He has presented on a wide range of nutrition topics at local, regional and national conferences. Hilmar received his Bachelor’s degree in Nutrition/Dietetics and Master’s in Public Health Nutrition from the University of Minnesota. He has worked in the field of eating disorders for the past 12 years. Hilmar has extensive experience working with clients of all eating disorder diagnoses in both individual and group settings. He has a particular interest in mindfulness and body-centered approaches to eating disorder recovery.