The Truth About 5 Eating Disorder Myths 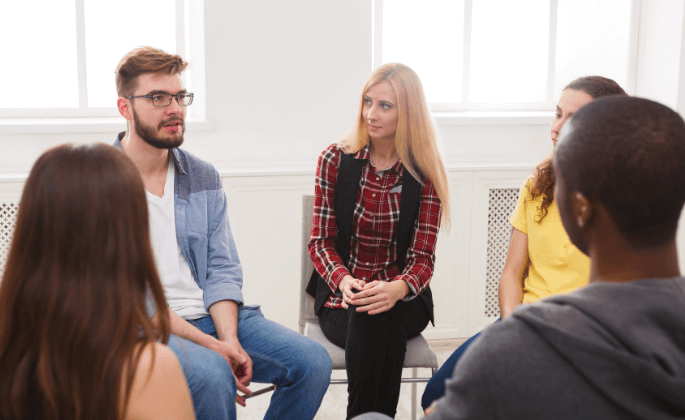 An estimated 30 million people in the United States have an eating disorder. The majority of them do not receive professional care. Many experience shame and stigma because of their illness, and many struggle all alone.

By educating ourselves and others, we can work to reduce stigma and to better understand these complex illnesses that affect so many. Here are five myths and facts about eating disorders.

Fact: This is the stereotypical image of eating disorders—a thin, young, white woman. It is this woman we’ve seen in media depictions of these disorders and heard about most in common chatter. Even within the field, research has historically focused on clients who fit this profile, in part because white women were (and still are) the most likely to receive care.

But this narrow demographic does not accurately reflect the diversity of those who experience these illnesses. Far from it. Eating disorders affect people of all ages, races, genders, sexual orientations, body sizes, classes, and abilities. They’re not just a “teenager’s problem” or a “white girl’s problem.” They’re not something that affects only wealthy people, or only cisgender people, or only people of any other social group. Eating disorders don’t discriminate in these ways; they span across all social categories.

Myth: Eating disorders are a choice.

Fact: Some uninformed comments imply that people with eating disorders chose their illnesses, and, therefore, can just as simply choose not to have them. We hear it in suggestions like “Why don’t you just eat?” (or just stop bingeing, purging, or any other disordered behavior). “You just need more willpower!”

More subtly, we also hear traces of this myth in descriptions of eating disorders as decisions tied to a particular desire. Often mentioned is the desire for control or comfort. Consider the eating disorder stories you’ve heard along these lines: “Overwhelmed by life, they wanted to control something. They started to control food—counting, tracking, measuring, etc. It was ‘healthy’ at first, but they went too far.” As is, this simplistic representation could imply that this person’s eating disorder was a conscious decision to seek control that was taken to the extreme.

Eating disorders are complex, biologically-influenced conditions. They’re influenced by many factors, but one thing is clear: No one chooses one.

Fact: There is no single cause of eating disorders—and that includes parents and families. Eating disorders are caused by a complex combination of biological, psychological, and social factors; they’re “biopsychosocial” in nature. With illnesses as multifactorial as these, there is no one thing a parent might say or do to make certain their child will or will not develop one.

While parents are not to blame, there are things we can all do to help strengthen some protective factors against eating disorders. To offset the social component of these illnesses, for example, we can address environmental risk factors. One way to counteract negative cultural messages about weight and body is to share different messages with children. We can praise children for characteristics completely unrelated to appearance. We can remove judgments and moral labels from our food to practice an “all foods fit” philosophy at home. We can speak neutrally or positively about our own bodies, modeling for our children the peaceful relationship with body we’d like them to have. While these preventive actions cannot guarantee that a child will not develop an eating disorder, they may indeed help to offset some of the risk factors.

Myth: Anorexia is the only eating disorder.

Fact: While anorexia may be the most well-known eating disorder, it is far from the only one. In fact, it isn’t even the most common. Binge eating disorder (BED) is more common than anorexia and bulimia combined, and people also struggle with OSFED, ARFID, and compulsive overeating or disordered eating more generally.

Is it also important to note that anorexia is not the “worst” or the only serious eating disorder. This misconception contributes to a false eating disorder hierarchy that places anorexia at the top. All eating disorders are harmful. Next to opioid use disorder, eating disorders are the deadliest of all behavioral health conditions. Even for those whose illnesses are not fatal, the physical impacts can be serious and long-lasting.

Myth: You can tell if someone has an eating disorder by simply looking at them.

Fact: There is no one eating disorder “look.” It is certainly not the stereotypical image mentioned above, and in most cases, it’s not something that is immediately apparent. Unfortunately, the idea that we’ll automatically know if our friends, family members, or others are struggling keeps many people ill in plain sight.

Eating disorders are mental illnesses that have physical consequences. Some people experience weight changes as a result of their disorder; others do not. As in other mental illnesses, many eating disorder symptoms are invisible to the naked eye. Distress about food and body weight, for example, is often kept private, and disordered behaviors can long be kept secret. Because eating disorders thrive in secrecy and isolation, we cannot just look for visible symptoms. We must see beyond the obvious to notice the deeper ways an insidious eating disorder may be affecting someone.

Learn more eating disorder facts here. If you are concerned that you or someone you know might be struggling with food or body concerns, please take our online quiz. Reach us any day by calling 1-888-364-5977.