The Sticks and Stones of Eating Disorder Recovery 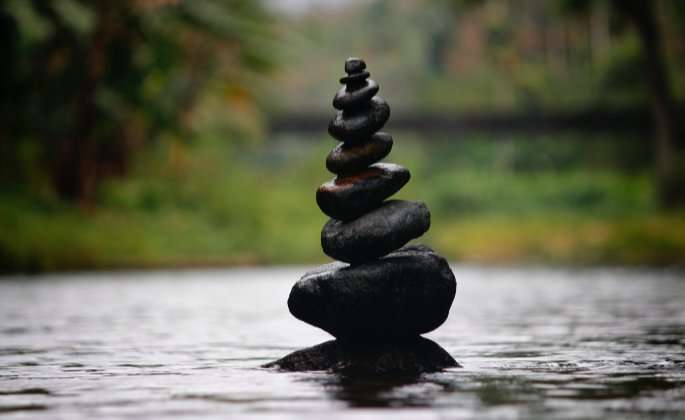 *Some guest blogs may mention eating disorder behaviors or thoughts. Keep in mind that everyone has a unique road to recovery and that this is one person’s story.

“I didn’t know you had an eating disorder,” a coworker I’ll call Jane said when she learned that I’d written a book about my recovery. “You don’t look like you do. I’ve always thought you look… normal.”

Before I completed treatment at The Emily Program, Jane’s comment would have boomed in my head and created an echo that followed me everywhere. It also would have sent me careening back into the starvation and compulsive exercise that had hijacked my 20s due to my need to be anything but normal. Back then, I’d equated “normal” with “average” and was terrified of being average. Who will love, respect, or want me if I’m just average? I’d wondered. So I’d wanted to be much more than average: I’d wanted to be perfect. Being perfect had included being thin, tiny, and delicate—a butterfly among birds.

Fortunately, by the time Jane made her comment, I knew that no one is perfect. Perfection is impossible and chasing it had made me miserable. So Jane’s words only stung for a split-second. That sting, treatment had taught me, was a figment of my imagination, a wisp of the warped thinking that fuels an eating disorder. Jane had meant to pay me a compliment, so I chose to ignore her statement’s imaginary sting and focus on its intent.

That choice allowed me to feel gratitude for Jane’s kindness instead of dread of being judged. It revealed how far I’d come in managing my eating disorder and reminded me how much I value my current health, which I fought hard to establish. It also made clear what it means to be in recovery.

I, more than most people, should have understood immediately what it means to be in recovery because my dad was a substance abuse counselor for many years. I grew up hearing 12-step program phrases like “Easy does it” and “It works if you work it” in everyday conversation. I remembered dad explaining that addicts aren’t “cured” or even “recovered” but forever “recovering” or “in recovery.” I’d believed him, but I hadn’t understood the difference between “recovered” and “in recovery” as anything but semantics.

I also hadn’t understood how similar eating disorders are to addiction. When my Emily Program therapist explained that, contrary to my assumption, treatment would likely take months or even years and that my disorder would still be with me but managed, I felt like I’d been on trial and now faced a life sentence. I couldn’t imagine how it would look or feel to “manage” my disorder. That concept seemed too vague and messy to implement. My perfectionism craved order delineated by sharp, black-and-white distinctions; it approached every aspect of life as an all-or-nothing prospect: a person was average or perfect, fat or thin, ill or well, addicted or cured. There was no in-between.

Initially, my recovery was slow and not at all steady. The idea that relapses were a natural part of recovery took a long time to sink in, but once it did, I began to understand what it meant to be “in recovery” as opposed to “recovered.” I could see why “one day at a time” became Alcoholics Anonymous’ most famous saying: because sobriety is a constant choice. Every day (sometimes every minute) an addict has to choose to stay sober instead of giving in to addiction’s temptations. Sobriety and management are about stacking up tiny, individual choices—passing a familiar bar instead of going in, calling a friend for emotional support instead of bingeing—one at a time to construct a healthy life. And it’s much less daunting to think about confronting one choice or managing one day than to think about maintaining a “perfect” record for the rest of my life.

My choice to focus on Jane’s intent instead of perfectionism’s sting represented one more individual victory in my record of management success. It revealed how comfortable I’ve become with living in the in-between. It meant I’m “in recovery” rather than “recovered” because I still flinched at Jane’s words but then recognized my reaction as a symptom of the eating disorder, dismissed it, and went on with my day unfazed.

My understanding of management and recovery has evolved to take the form of a metaphor. At its worst, my eating disorder was a recording that played in my head 24 hours a day, blaring so loudly that it drowns out or distorted every other sound. Even the most innocuous statement came across to me as a screeching indictment of my shortcomings. Treatment helped me construct a volume dial and taught me how to turn it. The recording still plays in my head, but instead of staying at a volume of 10 on a 1-10 scale, it succumbs to my adjustments of the dial, hovering between 2 and 4. And the longer I’m in recovery, the easier it is to recognize when life events make the volume spike. Then I use what I’ve learned to turn the dial.

Now I know what Dad meant by another statement he made often: he liked being around people in recovery because they convey unique depth, self-awareness, and empathy. I would never have chosen to develop an eating disorder but with hindsight, I’m grateful for what recovery has taught me and the self-awareness it sparked. And I appreciate in a new and deeper way one other phrase I heard often in childhood—another saying I think applies wholeheartedly to eating disorder recovery: sticks and stones may break my bones, but words can never hurt me.