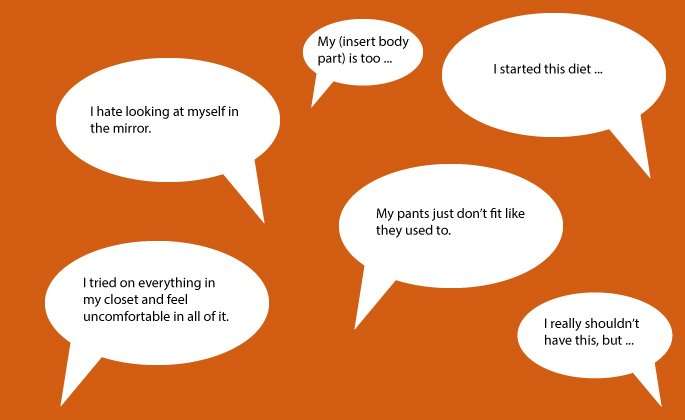 By Liz Rognes, a former Emily Program client in recovery. She is a teacher, writer, and musician who lives in Spokane, WA.

Occasionally, a coworker or an acquaintance will tell me about her new weight-loss diet, or she’ll make some kind of self-deprecating joke about how she shouldn’t have that second cookie. At work, at the store, at the park with other moms, it happens all the time. It’s so ordinary that it seems mundane, expected—especially among women (though I do hear it from men, too). Sometimes it feels like I’m expected to reassure the person who is making the negative comment about their body by directing the attention to my own body, in order to share the feeling of self-disapproval. I used to do this fluently. Without missing a beat, I would reassure the woman who was joking about her body or detailing her new diet, and then I would point at myself, as if to say, “You see? I feel bad about my body, too. You’re not alone. We’re doing what we’re supposed to do.”

This kind of casual negativity about bodies, this cultural script that women are supposed to recite, was an enabling crutch for my eating disorder. It wasn’t the one thing that “caused” my eating disorder, but hearing everyone else so casually judge their bodies made me feel like it was normal to say disparaging things about my own body, normal to think about food all the time, and normal to constantly try to lose weight. Growing up, I heard women I loved and respected express disdain for their bodies. I heard my friends do it. I saw powerful women in media obsess about perceived flaws, and I saw the media analyze and criticize every part of women’s bodies. I began to look critically at my body, too. I began to internalize those messages, and, as my eating disorder developed, casual negative self-talk became increasingly destructive.

I learned a lot about my own negative self-talk in treatment. As my eating disorder developed, it quickly became almost constant. It was so prevalent that I often didn’t even recognize it. A few years after my last inpatient stay, I found a stack of old journals, and I was horrified to see the way I wrote about myself. Almost every page detailed my disgust for my body, and I equated that disgust with my self-worth. I wrote and repeated horrible things about myself and my body. Reading it a few years later, I recognized the voice on the page—it was the voice of my eating disorder.

Through years of therapy and practice, that voice has quieted. It hasn’t completely disappeared—it still occasionally chirps and nudges at me, but it’s not constant. It’s not overpowering. And I’ve learned to be aware of it. When I hear that voice, I try to challenge it by thinking something loving or positive about my body instead. Or I try to figure out what’s prompting it. Usually, the motivation behind the chirp (okay, once in a while it shouts, but not very often) isn’t even actually my body; it’s usually that I’m feeling overwhelmed or anxious about something at work or home, or I’m feeling upset about an interaction. Once I figure out what’s really going on, once I’m able to talk about it with my partner or a friend or my therapist, I usually feel a little better.

Of course, not every person who says negative things about her or his body develops a clinical eating disorder. I don’t think that we should censor or police how we talk about our bodies, and I definitely think that it can be valuable to express insecurity. It can be helpful to talk honestly to a friend about feeling uncomfortable. But I think that it can also be useful to draw attention to the ways we unknowingly make negative conversations about our bodies part of a routine. I think that it’s useful to consider the ways we present our bodies and relationships to our bodies, especially in front of other women and girls (and men and boys) who might be listening.

Changing my self-talk and choosing not to engage in casual negative conversations about food and bodies has made an incredible difference in my relationship with my own body. It’s one of the tools that has helped me the most in my recovery. I’m not saying that I’m filled to the brim with all confidence all the time, but I’m kinder to myself. I’m gentler with myself. I try not to make nonchalant jokes about my body, partly as a way of protecting my own recovery, but also because I don’t want to play into the myth that women are supposed to say bad things about their bodies. And, over time, as I’ve grown to feel more comfortable with and even happy in my own body, as I’ve developed healthier thinking, I’ve learned that I can hear other people say casually negative things about their bodies without taking it personally—and it’s inevitable that I’ll hear those kinds of nonchalant remarks because they’re so pervasive.

In my life now, when a woman at the park or a coworker makes an offhand negative comment about her body, I don’t reciprocate. I’ll try to reassure her in a different way than I used to, and I won’t say something negative about my body in return, even if I’m feeling insecure. I think about who might be listening: our daughters or sons, students, other colleagues or moms or acquaintances, the woman I’m talking to—and me, too.