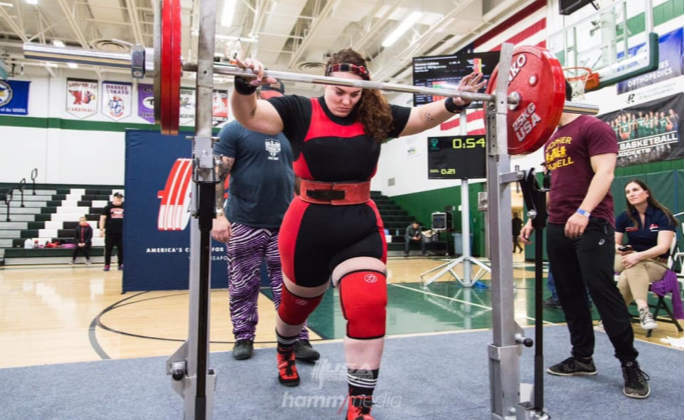 Shannon Callahan is a full-time public defender who in her work, gives a voice to the voiceless. In her spare time, Shannon enjoys using her voice, as part of the GRRRL Army, to help teach women non-judgment, to understand and embrace that we have a positive impact on the world, and to further the global revolution of body acceptance.

I grew up with a mother who didn’t love herself or her physical appearance, so naturally, I learned what I was taught, I learned what I saw. I was parented but not shown love or nurturing. I grew up being told what I could and couldn’t eat and what I should and shouldn’t eat. I grew up being told things like, “you don’t get to leave the table until you drink all of your milk, this isn’t a restaurant; you eat what you’re given or you don’t eat at all…” I was never taught what balance and moderation were nor was I given the tools for a healthy relationship with food. If I ever asked why I was met with “because I said so” or “because I’m the parent.” I grew up without choice.

It all started with I was 11. I think I so desperately sought connection with my mother that I would do anything to bond or spend time with her. I wasn’t going to get that connection from my father who, I found out at 19 when I overheard a conversation my mother was having, didn’t want me and resented me for just being born; for existing. The way I was able to connect with my mother was through dieting and weight loss. When I was 11, she introduced me to the Atkins diet. This type of diet fed my perfectionism; I had to do everything “right” or not do it at all. If I did not I failed. This applied to everything I did: school, sports, dieting.

My mother and I would bond over counting carbs, pounds lost, and go shopping to celebrate. I would get the instant gratification and praise that I was so desperate for. This, however, didn’t last. The Atkins diet wasn’t sustainable. As I transitioned from elementary school to junior high school, a huge change in a child’s life, I gained the weight back faster than I had lost it. I had failed and because of that, I started to punish myself.

That is when my anorexia began. I was 13. This was also right around the time that my parents got divorced and that I was abandoned by my mother who found a boyfriend. My father was verbally and physically abusive and my mother found a new man who wasn’t—who treated her well and who loved her. As a result of that, I no longer had a parent. I wouldn’t see my mother for days. When she’d come home and I’d long for connection with her I was told that I was jealous of her because she was happy. If there was any sort of food in the house that was touched, I would be verbally abused for eating it. I would be told, “Just because it’s there doesn’t mean you get to eat it.”

Someone asked me recently if I had any other adults in my life that helped me or that I could lean on for support. I had adults in my life that loved and cared about me but those adults simply wanted to “fix” what was wrong with me. By doing so, they would punish me; they would show me “tough love.” My aunt and uncle would make fun of my physical appearance and call me a skeleton or a matchstick. Coaches would tell me that if I didn’t eat, I wouldn’t get to play. This didn’t work. I couldn’t eat. I feared food. I feared that any food I put into my body would just make me fat.

So, I trained my body to exist on one meal a day, if that. I did this for years. In ninth grade, when I was 14, I ended up moving in with my mother’s boyfriend and switching schools for a second time. I switched junior high schools between eighth and ninth grade because I could no longer handle the bullying from my peers. To my surprise, some of those same peers also switched schools, to the other junior high. The constant bullying continued until I couldn’t handle it anymore.

I went from ninth grade in a junior high school to finishing the remainder of my ninth-grade year in high school with new people and new friends who knew nothing about my past. I think at the time I transitioned schools I also hit my breaking point. I couldn’t starve myself anymore. The first time I hung out with my new friends, I spoke about how I didn’t like candy and didn’t like pizza but I ate it all. I binged. I think this was my way of punishing myself and my body for not eating.

This is when the binging and purging started. I maybe only recall a handful of times where I would force myself to throw up, however, I knew how much food my body could handle before I couldn’t help but throw up. I would do just that. I took laxatives and every diet pill I could get my hands on. I did anything and everything to continue to control my body and mind into believing that I had to fear food. That if I ate, I failed and would get fat. If I ate, the next three days I wouldn’t. I wrote in permanent marker, “no food,” all over my body in places that others wouldn’t see it. This continued all throughout high school.

After high school and when I started college, I tried to make changes but those changes were impossible when I didn’t know how. The binging and purging subsided but the extreme dieting and food restriction became constant. I found other ways to control my weight such as seeking out “help” from a medical doctor who just ended up prescribing me a medication to suppress my appetite. That worked for a while until it didn’t work anymore.

After undergrad, I went onto law school. During law school, I met new friends and one in particular who tried to help change my relationship with food and exercise. Though my eating disorder was ever changing, the one constant in my life was my habitual over-exercising and punishing myself if I missed a day. There were times when I would exercise twice a day.

At that stage in my eating disorder, I was binge-eating. That started when I was diagnosed with celiac disease, an autoimmune disorder in which your body cannot digest gluten. If gluten is ingested, your body essentially attacks itself, which results in the destruction of the small intestine. My first thought when I was diagnosed with celiac disease was one of expectation that I would lose weight. That didn’t happen. My relationship with food morphed into a belief that I now didn’t get to eat real food and anything that was gluten-free wasn’t good. In the rare instances that I found something gluten-free that I enjoyed, I would binge.

In 2014, I found a gym that I loved and a trainer that paid attention to me. A trainer that recognized that something was going on with me, something bigger than simply, “I don’t know what foods to eat.” I didn’t know how to eat. Right around that same time, I became good friends with an attorney, also my supervisor at my job, who was seeing a therapist at the Emily Program. When I was ready, I asked her about it and she encouraged me to seek help as well. So, I did. I started with a therapist, whom I still see to this day, and a dietitian. During winter break, I was able to enter into seven weeks of the BED intensive outpatient treatment program (IOP). It was a struggle at first. The therapeutic meals were a constant reminder of what I couldn’t eat; that I didn’t have a choice.

Finally, one day, something clicked. Pizza was on the menu and like all meals, I was provided a gluten-free option. That day and most days, I welcomed and enjoyed challenges. Instead of taking just my gluten-free option, I also put a piece of pizza containing gluten onto a separate plate and placed it on the table in my direct line of sight. I told myself and the rest of my group members, “It is what it is, not what it isn’t.” The food that I eat, which is gluten-free, is food that nourishes my body, it isn’t anything less. By eating gluten-free, my body functioned, I wasn’t in pain and I wasn’t constantly sick. At that moment, I felt acceptance. I accepted the fact that as a result of having celiac disease, I get to eat gluten-free.

I completed IOP in January of 2015 and have been in recovery ever since. However, I’m still learning—I am in recovery, I am not recovered. It wasn’t until most recently through powerlifting and Kortney Olson, the CEO, and creator of GRRRL and GRRRL clothing, a clothing brand for women that does not use traditional sizing and instead bases their sizes off of the measurements of female athletes, that I learned body acceptance. Through Kortney, I’ve also learned that vulnerability is a strength, not a weakness, and that sharing my story will not only help me but that it has the power to help others. I’ve learned that I am important and I am enough. We are all enough. We are all worthy because we are.

For quite some time, it was hard for me to believe that my recovery was real. I thought that it was too quick. But my therapist helped me realize that my recovery was very much real and I am able to believe that. I’ve learned that recovery ebbs and flows and some days are harder than others. Recovery is a process and part of that process is being mindful about each and every thought and feeling you have and how those thoughts and feelings could control you and the decisions you make as a result of those thoughts and feelings.

The fact that I now reflect instead of react tells me that I am in recovery. I am not and will never be recovered because that is past tense and recovery is ongoing. But, that reflection and proof is part of what I need to not only believe in myself but to believe in the process. I think it’s important for us to believe in ourselves because when we believe in ourselves, we can do anything.