Living Moderation in a City of Extremes, Part 4: Hard-to-Handle-Anger 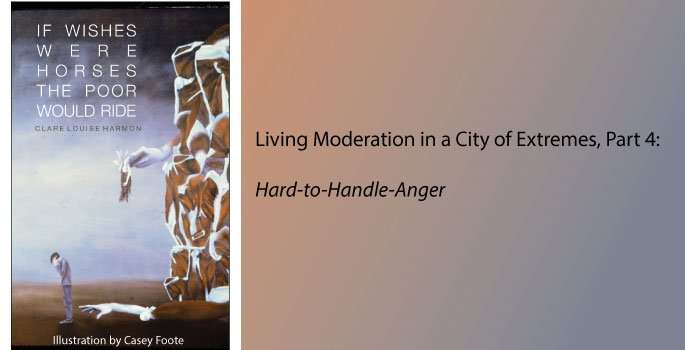 By Clare Harmon, a former Emily Program client, and woman in recovery

Two weeks ago I assisted at a performing arts day camp for adolescent girls. They learned theory, instrumental technique, rehearsal skills, and performed songs made famous by Nina Simone, Irma Thomas, and Ella Fitzgerald. In my last entry, I wrote about my first day there, and here, now, I still consider the experience a transformative one. All cliché aside, music is super great.

Two days ago, my chapbook If Wishes Were Horses the Poor Would Ride went on sale.  The book is the first half of my thesis and in the preface to the latter, I describe the poems within as “flying vitriol.” They’re about my life as a classical musician and they’re brutal. Really, really, brutal. Almost every proper noun is “[Redacted]” and although I tried to write some sweet poems, in whole the manuscript came out, well, pretty torqued. The poems move through the world of classical music in a kind of cocktail party parlance. I tried to recite with practiced ease the most horrific stories in their most egregious iterations. I wanted to impress upon my audience that the transcendent beauty we celebrate in performances of Mozart et al comes at a high price. I wanted to articulate that—all jokes aside—music sux.

In the weeks and days preceding the release of Wishes, I’ve spent a lot of time with the manuscript interrogating its tone and intent. I go round and round: do I pull it? Censor it? Edit it? Breach my contract? And after all this soul-searching, the only thing I’m certain of is that I’m still (or was, at the point of finalizing the manuscript) really pissed at an entire art form.

But here’s the thing about anger: it’s both indicative and clarity-inducing. One of my favorite writers, Maria Lugones, notes that “anger constitutes an indictment or a rebellion.” To be angry is to recognize an injustice, to identify and respond to something false. She goes on to remind us that anger can also produce a clarity of thought not previously possible: “I have been taught that in a fit of anger one is cognitively at a loss. Yet, when I have observed women in hard-to-handle anger, they have been outrageously clearheaded; their words clean, true, undiluted by regard for others’ feelings or possible reactions.”

The answer, though nearing, ultimately eludes me. I’m still in “reflection:” still turning over the text, its subjects, its consequences in my mind. I’m committed to opening a discussion on institutional misogyny but unsure if I am prepared to deal with the consequences of doing so. And I’m thinking about Lugones’ “hard-to-handle” anger of which Wishes is undoubtedly a product. What would it mean to my recovery to censor or discard a “clean” and “true” emotional outpouring? Is this not analogous to the ways in which I—during the most symptom-heavy years of my eating disorder—used food and self-injury as repositories for similarly uncomfortable emotions?

As I write this, I land on a bit of a cop-out: it’s complicated. I can neither pull the entire book (see above) nor fully endorse it. Wishes is not a one-dimensional screed, but an art object with aesthetic value. It gives voice to a reality rarely revealed but often experienced. But at the same time, its subjects are real people—people I, by and large, still adore. I am grateful for the ways in which my life has unfolded, and these people were and perhaps will continue to be, integral to that unfolding. Yet, I have to believe I am doing a service by voicing my anger and calling out an institution. In short, it’s complicated and requires an attitude of with-ness: how to simply be with the complexity, recognize the use-value of the anger and accept the consequences of the book’s existence.

A little about Clare: She is the author of two books of poetry, The Thingbody (Instar Books, 2015) and If Wishes Were Horses the Poor Would Ride (Finishing Line Press, forthcoming 2016). For more posts from Clare:

Living Moderation in a City of Extremes, Part 1

Living Moderation in a City of Extremes, Part 2: Guilt and Negative Self-Talk in the Lower Ninth

Living Moderation in a City of Extremes, Part 3: Recovery as Reclamation