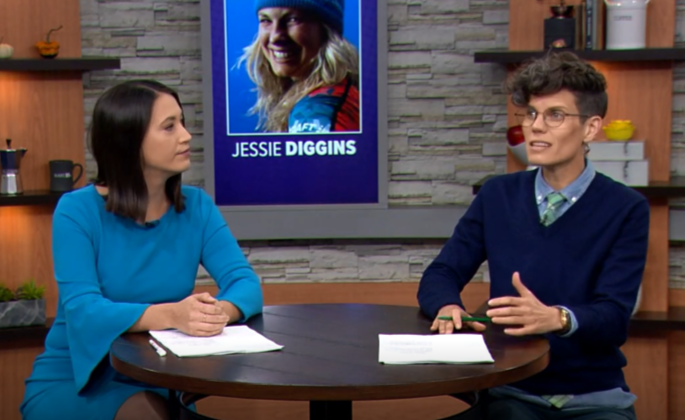 Last night, Jessie Diggins was featured on Kare 11 News to tell viewers about her experience with an eating disorder as a young adult. You can watch the full segment here.

Nearly a decade before her Olympic gold win, Jessie was facing a life-threatening struggle with an eating disorder. During her senior year in high school, she developed an eating disorder that quickly morphed into something that was controlling her life. At 18, Jessie found herself engaging in disordered behavior and negative, persistent thoughts regarding her weight.

Her parents took great concern in the changes they noticed in their daughter. They approached her, saying that she didn’t seem like her normal self anymore and that her personality had drastically changed. They were afraid and wanted their daughter to receive appropriate eating disorder treatment, so they told her about The Emily Program. Jessie, suffering and not wanting to hurt her family any further, called The Emily Program and started treatment.

After her time at The Emily Program, Jessie experienced a full recovery from her eating disorder. She learned that her eating disorder was so much deeper than being just about body image and food, but that it was also about perfectionism and fear. Jessie says The Emily Program saved her life and taught her that she is exactly who she is supposed to be. Jessie continued on to find healing, support, and eventually a gold medal.

If you would like to hear Jessie Diggins tell her story, she will be speaking this Saturday, November 3rd at The Emily Program’s 25 Anniversary Celebration. This celebration is free and open to all. It will be held at our Saint Louis location at 5354 Parkdale Drive, St. Louis Park, Minnesota at 2:30 p.m.

Like Jessie, The Emily Program hopes to offer recovery to all individuals that are struggling. The Emily Program’s facilities are warm and approachable. Our team strives to make everyone feel safe and welcome, erasing the fear many can feel when seeking help. Call us at 1-888-364-5977 to learn more or schedule a tour.