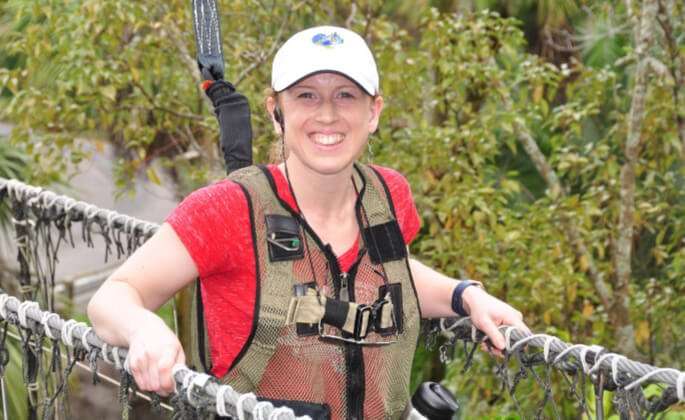 **This is one person’s story; everyone will have unique experiences on their own path to recovery and beyond. Some stories may mention eating disorder thoughts, behaviors, and symptom use. Please use your own discretion. And speak with your therapist as needed.

Jenny Scherer was a college athlete who struggled with anorexia. She is currently recovered and is a runner, yogi, and WI sports fan. Jenny works to help student-athletes learn, develop and thrive.

I’ve thought a lot about what someone could have said to me that would have made me get treatment for my eating disorder sooner than I actually did, particularly because I want to continue to be the advocate and the educator that I didn’t have in my time as a college and professional athlete. I believe strongly in educating student-athletes about their risk for eating disorders and intervening as early as possible when there are warning signs.

In my own experience, I eventually had a roommate who confronted me about my disordered eating habits and my distorted thinking, but this was already several months in to my professional running career. Prior to that time, I didn’t have anyone question the way I lived my life. I think a lot of it was success-driven. I was winning, and for a period of time at least, not getting injured, so why try and fix something that didn’t seem broken? That’s how I see it, looking back at it now.

I wish I would have had a college roommate, teammate, or coach ask me how I was doing more frequently. Like, really ask me how I was doing. I think that simple question could have clued those people in to how obsessive my behavior and how distorted my thoughts had become. I never ate with the team at the cafeteria, I only had a small group of foods I would eat, I ran twice a day, and sometimes lifted weights in between. I lived to run, and I ran so I felt that I deserved to eat.

If I were to give advice to teammates, coaches, or athletic trainers who don’t know how to talk to someone that they think may be struggling with disordered eating or an eating disorder, I would say, never underestimate the power of asking, “how are you doing?” And then, being fully present in listening to their answer.

As I alluded to above, I would say being educated on the signs and symptoms of eating disorders may have led me to seek treatment earlier. This could have happened via a talk from a sports dietician, or a talk from my coach as a result of them being well-versed about the risks of eating disorders in female distance runners. Or, perhaps my parents could have said something about my habits and routine, giving me an indication it could be unhealthy.

Knowing what resources are available is also crucial in recovery. That way, if a person denies having issues with food and/or over-exercise, you can say, “I’m always here to listen, but so are the on-campus counselors and dieticians, which can be seen confidentially here…” Ultimately, it’s up to the person struggling to ask for help, but providing them with a list of resources and frequently checking in with them can definitely go a long way. I definitely believe it would have for me.