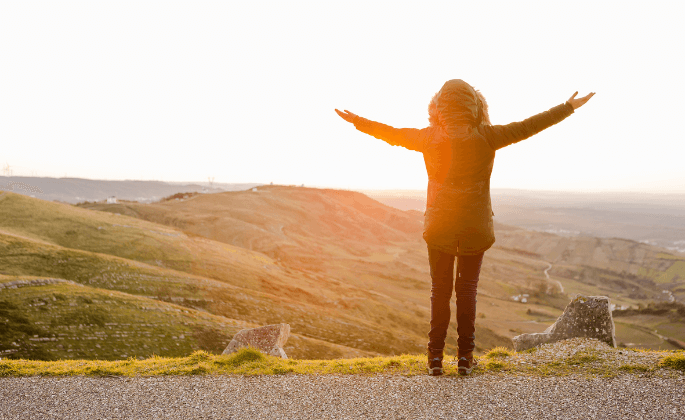 **Content warning: This is one person’s story; everyone will have unique experiences in recovery and beyond. Some stories may mention eating disorder thoughts, behaviors, and symptoms. This story includes mention of self-harm. Please use your discretion when reading and speak with your support system as needed.

This blog was submitted anonymously by a person in eating disorder recovery.

My eating disorder never really “started.” It just happened. At least, that’s what I used to think.

When I was 11, I was diagnosed with diabetes, and for the first time in my life, I craved food. Sure, I had been a typical kid with a typical candy-shaped stomach. But this craving was different. My body was starved from weeks of cellular fasting, and it told me to eat. Ok, so far so good.

Through my teenage years, those beloved hormones began to race through my system. My body started to change, and with it, so did my metabolism. I cut lunches and felt guilty when I couldn’t resist the urge to fill my blossoming belly (although in truth I was still quite petite). Evening snacks evolved from a handful of nuts to a cup or two—in any case, more than I intended. I felt weak, unable to control this ever-persistent desire. But it never interfered with school or work. It was a mild case of disorganized eating.

Well, soon enough I graduated high school. My family and I moved from China to Seattle, Washington. China had been our home for the past eight years and we were bombarded with culture shock. As far as eating habits were concerned, I had to adjust to an increase in baked versus cooked foods, the pattern of large portions, and longing for foods that would remind me of “home.”

The biggest causative factor was yet to come. Yep, it was that coming-of-age moment when my parents shoved me out of the nest. Or rather, they fled the nest with me still in it. As they moved overseas, I was left in my parents’ condo with few friends, no hobbies, and perfect grades to maintain. What better environment for an eating disorder to take wing? When I was lonely, I ate. When I was bored, I ate. When I was upset, I ate. Fast forward a couple years, I was bingeing at least every few days. I was so disgusted with myself, and always felt fat. I exercised late into the night, avoided eating around people, and even scarfed down whole meals in public bathrooms. I hated myself so much that I considered self-harm as a way to punish myself as well as provide an outlet for my pain. My anxiety was like a fountain quickly rising under the pressure of the need to find a job, the medical school admissions test (I was an aspiring pre-med student), and new family challenges that came with my family’s return to Seattle the summer of my graduation. Without realizing it, I had developed generalized anxiety and depression. They were simultaneously fueling and being fueled by my eating disorder.

After another year of failed attempts to control my behaviors, I finally agreed to regular counseling—perhaps my second major step toward healing. My first major step was confiding in trusted friends not only about bingeing that was now a daily occurrence, but also about the powerfully destructive self-hate that was only growing. These friends urged me to seek professional help. So, I saw a therapist weekly for nearly three months before she referred me to an ED specialist. My specialist has slowly walked with me on this long journey to recovery. “It’s gonna take time,” she would always tell me when I came in and repeated the same sad story of my miserable life, as I perceived it. Even while seeing her regularly, I engaged in self-harm and had suicidal thoughts. Sometime, maybe I’ll tell her that I would also binge just before coming to her office, ironically because I knew I would be inspired to “be good” after the visit.

As it turns out, however, experts are usually right. After much tender pestering from my counselor, I finally saw a psychiatrist who helped me tackle this mental distress from a medical perspective.

This was my third major healing step. Many tears and sleepless nights later, I realized that it had been two months since my last binge. The emotional joy and physical freedom were indescribable. Not only did I lack the urge to binge, but I also ate what I wanted without counting calories, exercised for the fun of it, and woke up in the morning with energy for a new day. It took some deep digging into my memory bank to pull up the old urges and feelings associated with bingeing. Half-worried that I’d forget my painful experiences and miss out on opportunities to share my story as encouragement to others, I put it down in writing.

Different people find motivation and endurance from different sources. For myself, I don’t believe I would have made it without God walking right beside me. My hope for people struggling with eating disorders is that we seek help before our breaking point, because we are worth the “trouble” it takes to scoop us up from the pits of despair. We are worth the finances, heartbreaks, late-night talks, and nutritious meals that the voices in our heads scream against. We can recover in due time. And we are worth it.