How To Support LGBTQ+ Individuals With Eating Disorders 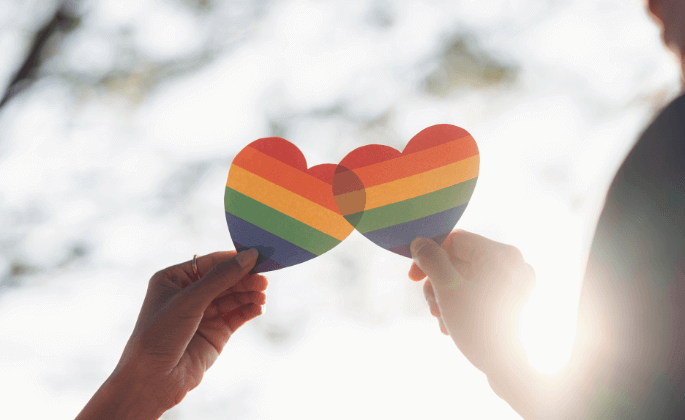 June is Pride Month, a time to celebrate the LGBTQ+ community and sexual and gender diversity. Members of the community and allies unite in pride and solidarity to recognize, honor, and uplift the voices of lesbian, gay, bisexual, transgender, and queer and/or questioning people.

As we honor the LGBTQ+ community this month and beyond, we must also commit to better understanding and addressing the issues it faces. One such issue is eating disorders, which affect LGBTQ+ people at disproportionately high rates.

In this article, we explore eating disorders in the LGBTQ+ community and offer ways to support affected community members during Pride and throughout the year.

Eating disorders in the LGBTQ+ community

Eating disorders aren’t unique to straight, cisgender women. They cut across all social categories and intersections, including sexual orientation and gender identity. While the majority of the field’s research has focused historically on straight females, the studies involving LGBTQ+ people show high prevalence rates of eating disorders.

In fact, research suggests that some LGBTQ+ community members experience eating disorders at even higher rates than their straight and cisgender counterparts.

Factors that may increase the likelihood of an eating disorder in a susceptible LGBTQ+ person include:

How to support LGBTQ+ individuals with eating disorders

Here are some strategies to provide support that is safe, inclusive, and affirming for LGBTQ+ community members with eating disorders.

Start by simply listening to LGBTQ+ people about their relationship with food and their bodies. Remember that each person is the expert of their experience, and any support offered should respect their individuality and guidance on what is and is not helpful.

Some practical tips for actively listening and learning include:

Adopt language that affirms all gender and sexual identities.

3. Acknowledge the intersection of eating disorders and LGBTQ+ identities.

Eating disorders can affect the LGBTQ+ community in unique ways. Recognize that special factors may play a role in the development and maintenance of these illnesses in this population, including:

4. Appreciate that recovery is not one size fits all.

Eating disorder recovery looks different for everyone, and several mainstream recovery messages may be particularly out of touch with the experiences and needs of LGBTQ+ people.

When providing messages of support, be wary of:

LGBTQ+ individuals face unique barriers to eating disorder treatment, and ensuring that the community has access to care is ongoing work.

Support efforts toward greater inclusion and diversity in the field, including:

Much like recovery itself, supporting LGBTQ+ people with eating disorders is an active process that requires compassion and sensitivity. To be helpful is to be inclusive, non-judgmental, and culturally competent. Care must be tailored to the needs of each person, reflecting an understanding of and respect for each person’s identity and unique life experiences.

At The Emily Program, we welcome people of all sexual orientations and gender identities with all types of eating disorders. If you are a member of the LGBTQ+ community struggling in your relationship with food, give us a call today at 1-888-364-5977.