How One College Student Took Over Washington (Not Really) 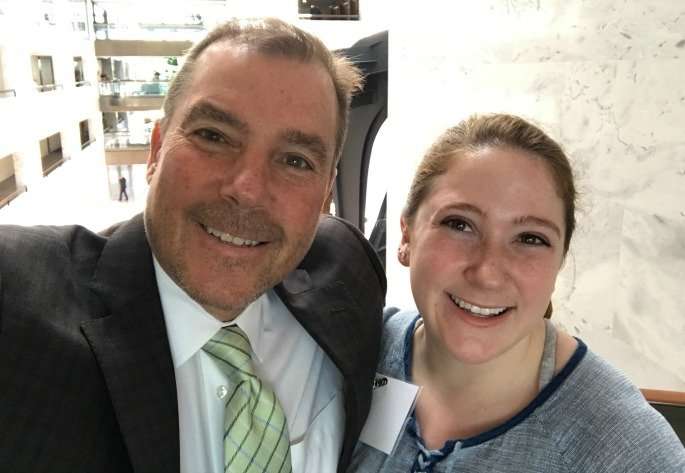 by Liza Miller, a college student studying psychology with an emphasis on Gender and Women’s Studies.

“Wait so all of these people are in The Red Sea?”
“No, no. It’s called the REDC. The Residential Eating Disorders Consortium.”

This was the first interaction I had at Lobby Day this year. Considering I was the one asking this question, I was not off to a great start.

To give you some background: I am a twenty-year-old college student studying psychology. So when my dad [Dirk Miller, Executive Chairman and Founder of The Emily Program] invited me to join him in petitioning representatives of members of Congress about eating disorder-related legislation, I felt both thrilled and wildly underprepared.

In particular, we were lobbying for Congress to include provisions for mental health services in the new pending health care act, mainly by including the Essential Health Benefits, ten health conditions insurance companies were required to cover under the previous health care act. Considering health insurance was already a mystery to me, convincing government experts to support our views on insurance-related policies seemed like an especially daunting task.

On Lobby Day, we woke up at the crack of dawn to start mentally and physically preparing for a whirlwind day. I took more time than the average Lobby Day attendee to get ready because I struggled to pull together a presentable professional look without the help of my dad, who insisted that the ideal outfit for me would be a Hillary Clinton pantsuit.

We were briefed on the ins and outs of talking to government officials and sent off to do the dirty work. Much to our surprise, my dad and I made up one lobbying group. Nervous, over-caffeinated, and perplexed as to why anyone thought the two of us would be capable on our own, we set off to the Capitol.

The lobbies outside the offices of Senate and House members looked like how I imagine the dressing rooms of Shark Tank. Fellow lobbyists paced the halls, reciting their best elevator pitches on why Senator such-and-such should support or oppose matter X. I quickly realized that no matter how much we knew or cared about eating disorders, the ticket to success was in our ability to sell our beliefs.

The first two appointments went well. The representatives we spoke with seemed to understand the issues we presented, regardless of whether or not they would convince their respective Congressperson to support our legislation. After Appointment #2, we took a break in the Senate cafeteria. As I ate some surprisingly decent fried chicken (kudos to you Senate cafeteria chefs), I looked around at a room filled to the brim with white middle-aged men in suits. I started to panic in this space because I realized that among the cohort of individuals responsible for our current legislation, there were very few people who personally understood issues relating to body image and eating disorders.

After riding on a wave of successful appointments, my dad and I made our way to the office of another Senator. We began this appointment like all the others, but as soon as my dad started explaining the importance of eating disorder treatment, the representative started inexplicably smirking. Taken aback, my dad paused to consider whether something he had said warranted this inappropriate reaction. At the end of the meeting, my dad extended an offer to the representative to come visit The Emily Program if he was ever in Minnesota, to which the man replied, “I have no intention of coming to Minnesota any time soon.”

As we walked out of this office, I felt like I had been punched in the gut. Prior to this experience, I thought eating disorders were a fairly non-controversial topic. This disorder has the highest mortality rate of any mental illness — why wouldn’t it warrant adequate treatment? After the sickening realization that eating disorder treatment is not unanimously supported, I felt discouraged. However, nearly a month after my Lobby Day experience, I feel encouraged about the work there is to be done and excited to be a part of it.

Someday in the future, when another dad decides to take his daughter to Lobby Day, here’s how I picture it: she easily conjures an outfit idea just by picturing the plethora of female government representatives she sees in the media. She goes to the Capitol and is greeted by a diverse group of Congress members, including those who personally understand her experiences. When she meets with government representatives, she is speaking with open, understanding, and considerate people. And when she leaves the Capitol, she feels invigorated and supported.