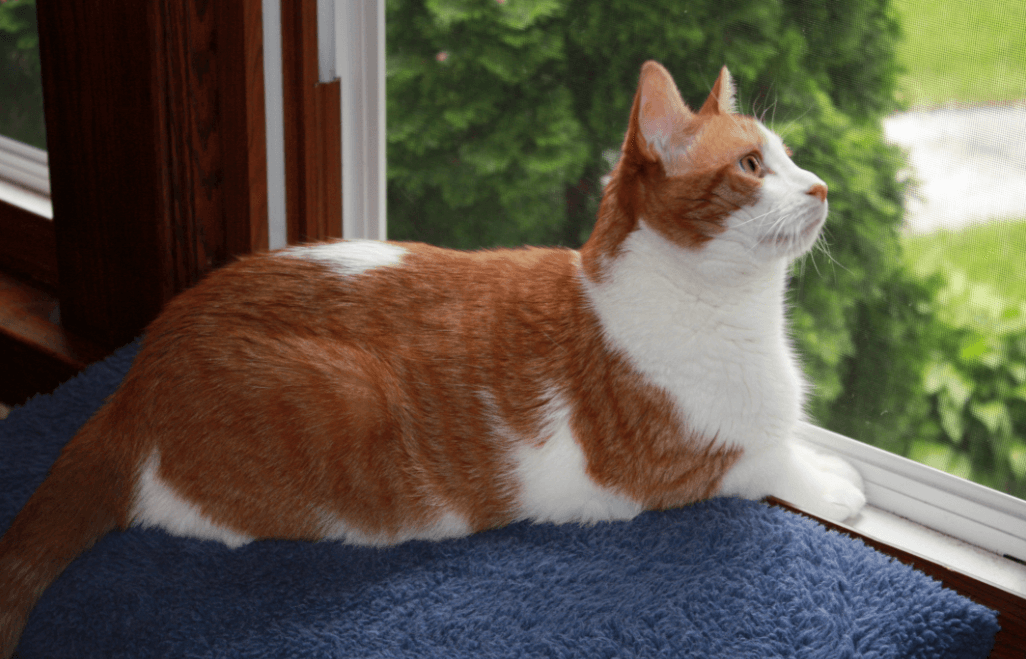 Lisa Whalen, a former Emily Program client, has a PhD in postsecondary and adult education, and an MA in creative and critical writing. She teaches writing and literature at North Hennepin Community College in Brooklyn Park, Minnesota. Her essays have been featured in An Introvert in an Extrovert World, WorkingUSA: The Journal of Labor and Society, and MotherShould? Whalen is working on publishing her memoir, Taking the Reins. In the meantime, she is a regular contributor to The Feisty Writer.

Oh, good, I thought when I saw a recent video on Facebook. Science is finally recognizing what we cat lovers have always sensed. The video summarized research studies showing the benefits cats provide for people’s mental, physical, and emotional health.

My first cat did everything mentioned in the video and more. He supported my recovery from an eating disorder by showering me with something I struggled to give myself: unconditional acceptance. He also demonstrated how much better life could be if I operated from a core belief that I was, and would be, OK.

My cat’s unconditional acceptance began with our first meeting at the Animal Humane Society (AHS) in St. Paul, Minnesota. Dubbed Garfield, he shared with his namesake an orange tabby’s distinctive color and stripes but nothing else—definitely not the comic cat’s grumpy cynicism. The second I looked at him, he began rubbing against his cage bars, begging to be pet. I gave him some scratches but hesitated to show more interest because he was a mismatch for what I sought: a young, small, female. Then I saw a sign declaring him an AHS Volunteer Favorite, so I decided to give him a chance. When I crouched down to pet him in a visiting room, he hopped atop my thighs and lay down, as if to say, “OK, I’ve adopted you. Let’s go home.”

“Garfield” showed the same acceptance when I opened his carrier in my kitchen. I didn’t need to follow shelter recommendations to let him get completely comfortable in one room before introducing him to the rest of the house. He strode out of the carrier without hesitation, sniffed the room’s corners, and then gave me a look both kind and impatient that said, “I get it. This is the kitchen. What’s next?”

At the time I didn’t think much about how “Garfield,” whom I renamed Jackson, settled in, except to feel grateful he handled the transition well. Now, however, I realize how astounding he was. Left at a shelter when 6 years old, Jackson still trusted people. Put in a cardboard carrier and then a car, deposited in an unfamiliar environment (my house) that he couldn’t control or escape and that might reveal danger around any corner, he never wavered from the calm, confident, curious, and affectionate nature he displayed the first time I saw him. That, I thought, is how I want to approach life. I didn’t seek to be reckless, just comfortable enough in my own skin not to feel anxious all the time.

Jackson became my best non-human friend. He supported my recovery by loving me consistently through my highest and lowest times. He didn’t care how much I ate or exercised, whether my weight went up or down. In fact, he preferred me in mismatched sweats and sloppy ponytails instead of skirts, heels, and makeup because sweats meant I’d stay home and he could curl up in my lap.

Jackson greeted everyone—even vet clinic staff—the same way he’d greeted me at AHS. When someone came to our house, he trotted to the entryway, rolled on his back, and gazed up them with a look that said, “Welcome to our home! Petting me is required for getting past the front door.” When I had a party, he made the rounds like a host. Watching him revealed how baseless many of my fears were about whether I was perfect enough to be accepted. He showed me that reaching out and opening up didn’t have to be scary.

Gratitude for having Jackson in my life led me to volunteer for AHS, something I’ve been doing for seven years now. Volunteering nudges me out of my shell and builds my confidence. None of the animals I meet there care how I look either, only how I treat them. Volunteering has also dispelled my fear of dogs, which prompted me to organize therapy dog visits at the college where I teach. Seeing student (and faculty and staff) joy upon noticing a therapy dog in the hallway made me joyful, too. Countless examples exist of how Jackson offered a stable platform from which I ventured into the world, knowing he’d be there when I returned.

Jackson’s unconditional acceptance continues benefitting me, even after his death at age 17. He gave me the courage to make a difference in another orange tabby’s life—a cat named Bubba who was Jackson’s opposite.

When I brought Bubba into an AHS visiting room, he froze in fear. Overwhelmed to paralysis by shelter sounds, smells, sights, and exams that included pokes and prods, he didn’t so much choose to sit in my lap as feel unable to move once I placed him there.

I treated Bubba the way Jackson treated me, accepting him unconditionally despite some strange behaviors and anxiety that made him flinch almost every time I moved. With time, patience, and care, Bubba transformed. Now, he naps beside my desk when I work at home, climbs into my lap when I lounge on the couch, and curls up beside me when I read in bed at night. He follows my husband around in the morning until given his after-breakfast petting. He even tags my leg with a paw when he wants my affection. Just two years after coming home, he even accepted a wandering stray cat we took in.

My relationships with Jackson and Bubba, along with my volunteer work at AHS, have helped me truly understand a saying that previously I had only accepted at surface level and never applied to myself: “Be Kind. Everyone you meet is fighting a battle you know nothing about.”

It’s almost impossible to focus on my troubles when I spend time with animals. As depicted in a recent comic, they can be part of an effective prescription for health.