‘Ed’ and All Her False Promises: A Story of Recovery 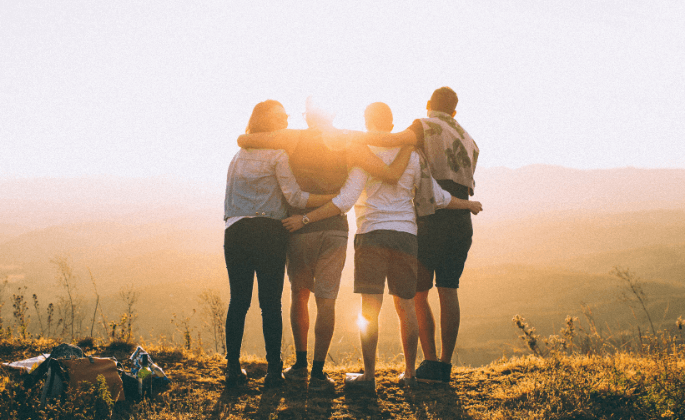 At the age of 14, I was diagnosed with anorexia nervosa. My admission into intensive care was sudden. I had gone from starving myself for months to being fed three meals and snacks a day in a hospital bed. Needless to say, I didn’t exactly embrace this abrupt change in routine. Though as traumatic as living through an eating disorder was, I believe I was able to survive for a few main reasons.

The first was my reckoning with control. A common feature of individuals struggling with disordered eating is an underlying fear of lacking control in one’s life, or feeling powerless and uncertain with their sense of self.

Throughout my freshman year of high school, I struggled to feel grounded and secure in shifting family dynamics, redefined friend groups, and a fluctuating identity with academics. In middle school, everything seemed so much easier, my grades were above average, and I felt more or less socially safe. In high school, I found myself frequently shifting between different social groups that were often in conflict. I felt tethered between old ties and new ones, constantly shifting “selves.” This ultimately led me to constantly question how I could be defined. At the end of the school year, my grades had dropped and I was no longer on the honor roll. Compounded by a disconnection with my academic self was a feeling of alienation from my own bodily identity. As I navigated puberty, I began to gain attention from older boys, leading me to objectify my own body as I learned to view it as social capital.

As a Type A personality driven by perfectionist tendencies, I felt intense shame when my end-of-year report card came. This is when the eating disorder made its formal debut, convincing me that the surface area of my body was proportional to the emptiness and confusion I felt in my academics and relationships. The eating disorder voice—or “Ed,” as I call her—told me that as chaotic and confused as I felt in almost every area of my life, there was one thing that only I could control: my body.

Of course, this was only an illusion of control, an empty promise offered by Ed. When I first started cutting calories, I felt powerful, almost ecstatic—a rush of dopamine coursed through my brain when my friends and family first noticed I had lost weight. For the first time in my life, I felt I was totally autonomous, taming the monster that Ed convinced me my body was. However, the few months following led me into a downward spiral of utter chaos. That’s when I realized that the monster had been controlling me all along, and the monster that I thought was my body was, in fact, an eating disorder.

In recovery, I realized that even our bodies have a mind of their own. Genetically, evolutionarily, we need food to survive. That is something that we cannot control; it’s simply a fact of life. But in controlling what I ate, I felt I could escape the intense anxiety I had over not knowing how to control my emotions.

My therapist introduced me to Cognitive Behavioral Therapy (CBT), often used to treat anxiety, OCD, and disordered eating. It helped me to draw a clearer understanding of the interconnectedness between triggering events, thoughts, emotions, and behaviors. By seeing the ED as a maladaptive coping tool, I could learn to regain control by deliberately choosing against the disordered behavior and find new adaptive ways of coping with my emotions.

Not surprisingly, there is rarely one cause that propels someone’s brain into developing an eating disorder. No one willingly chooses to take advice from a tiny sociopath in their brain screaming at them to eat less or eat x. As much as my path to recovery entailed grappling with my longing for control, on a deeper level, I realized this control-seeking was really a longing for self-mastery and self-actualization. In a highly distorted way, controlling my eating was more about a search for meaning than it was a means of shrinking my body. In school, I never felt that I was the best at anything. I was a good student and had a variety of interests but never felt as though I was “the” person in anything in relation to my peers. And so my body became a means of mastering my own domain.

In recovery from anorexia, I began to become increasingly sucked into the world of “wellness culture” and “clean eating,” and convinced myself that though starvation and restriction weren’t the path to the good life, utopia could be achieved through nutritiously dense food. This logic seemed balanced and healthy—I mean, surely it must be since our society values nutrition so much? Once again, I was being manipulated by Ed. But it didn’t feel like I was harming myself since I was eating “enough.” It wouldn’t be until a few years later in university that I realized I had orthorexia, and sneaky Ed was controlling my life—except instead of creating a regimen around calories, it was a regimen around micros and macros.

Food became dogma, and my devotion to the food rules I followed from nutrition bloggers and YouTubers became a means of filling the spiritual void in my being. Once again, Ed came back for a sequel with an adapted script in hand. This time, she told me that the void of meaning and deeper connection to the world was proportional to the “bad” foods I was putting in my body. She convinced me that perhaps I could find connection and purpose through nutrition. I began to view my body as a place of worship, the temple to purge my “sins” and repent.

Throughout my life, my relationship with religion and spirituality has changed dramatically. From a devout Catholic in elementary school to a spiritual relativist in early adolescence and eventually a full-throttle atheist, not only was my sense of self ambiguous and ever-changing, but so too was my trust in a higher power. Not only was the meaning of my life unclear leading up to the start of my eating disorder and eventual relapse years later, but so too was my search for the meaning, or at least some semblance of faith and direction in the universe.

Having a sense of purpose through self-mastery is something that is perceived to be a universal feature of self-actualization. When I realized that my anorexia and orthorexia were a stand-in for the lack of deeper connection that I felt with myself and my purpose in the world, I set out to seek meaning through more adaptive means.

In university, I focused on the ways that I could foster healthy relationships with my friends and become involved with social issues that affected my local and global communities. Every time I felt the anxiety and shame after a night out of drinking and greasy food, I would remind myself of the distortion that Ed was feeding me. The emptiness of my stomach is not in any way proportionate to my intrinsic value. Friends don’t care about my weight, my community couldn’t care less about my BMI, and the burning planet certainly has much bigger priorities than my waist-to-hip ratio.

Finally, I made it a priority to seek out community and challenge my fears of intimacy and vulnerability. Eating disorders are a notoriously isolating experience. Ed’s voice thrives off confinement and secrecy. Restricting food often leads to restricting social ties, something that became a daily reality for me throughout the height of my experience with various EDs. In January of 2021, I began seeing an online support group. Although I have progressed significantly over the years, I recognize that Ed is still a part of me, just tucked away, and there’s still so much I have yet to unpack. The support group has been such a powerfully enriching experience for me. People of all genders, ages, racial and ethnic identities come to this group once a week to share their journey of recovery. The solidarity and genuine love I feel for these people inspire me to want to exercise my experience as a means of supporting others in their path of recovery.

Fostering connection and community played such a pivotal role in my journey. It is so important for overcoming an eating disorder, challenging the parasitic voice that feeds off our fears of social insecurity. The greatest lesson I have learned about an eating disorder’s arsenal is that community is a logical contradiction to Ed. It offers hope for a future where food does not equal fear.