Demi Lovato Shows That Recovery Is a Process 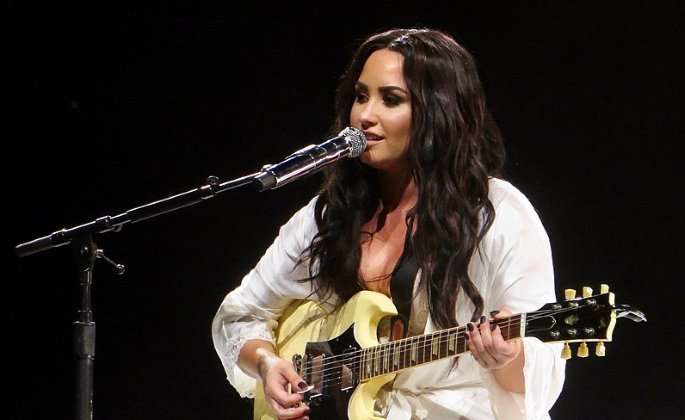 Eating disorder stories are often told with a “before” and an “after.”

Sick and well. Unhealthy and healthy. Ill and recovered.

At one end of the spectrum are those sick (“sick enough”) for care, and at the other, those celebrating complete freedom from their illness. Often in celebrity coverage, it’s either speculation that a star is “too thin”—a problematic conflation of weight and health, to be sure—or a bold declaration of self-acceptance and body positivity from someone who has seemingly put the issues behind them.

There is far less representation of recovery in action and little discussion of people living between the poles of before and after. We hear few in-progress stories of recovery, though millions of people actively recovering from eating disorders do live in this space. They stand in the gray between the black and white, somewhere along the journey from sick to well. Without their stories, the public has little context for understanding the messy, uncomfortable, and imperfect process of recovery.

We may hear “recovery is a process,” but crises and happy endings alone tell us little about that process. We may see a squiggly-lined graph captioned “recovery is not linear,” but how that line translates to real life is less clear.

And it’s emphatically more real for it.

Recovering in the Public Eye

On The Ellen Show last week, Demi Lovato described her eating disorder recovery as of late.

It’s a topic she’s been talking about for nearly a decade.

The singer first revealed her disorder after entering treatment for it in 2010. In the years since that disclosure, she has continued to share her experiences in music and interviews alike.

In 2011, Lovato described recovery as a daily journey: “I’m not going to be perfect, but . . . if I can make it through the day, that’s all that matters,” she said with the release of her single “Skyscraper.” The following year, she again portrayed her progress as gradual and imperfect. “I cannot tell you that I have not thrown up since treatment,” she said in her documentary Stay Strong.

Lovato continued to characterize recovery as a process in NAMI’s 2015 initiative, Be Vocal: Speak Up for Mental Health. In that campaign, she recounts that “things slowly started to change” for her when she asked for help, adding that living well continues to be “hard work.”

A couple years later, Lovato referred again to this hard work in her 2017 documentary, Simply Complicated. “Food is still the biggest challenge in my life and it controls . . . I don’t want to give it the power to say it controls my every thought, but it’s something that I’m constantly thinking about.”

Conversations about Lovato’s eating disorder often also include her struggles with self-harm and addiction, both issues commonly associated with eating disorders. The star relapsed in 2018, shortly after celebrating six years of sobriety.

This year, Lovato is speaking candidly about the circumstances that led to her relapse. On Ellen, she described her eating disorder as the “primary problem” that “turned into other things.”

Many processes have concrete, sequential steps. First this, then that, then this.

And simple depictions of eating disorder recovery would have you believe that this process is simply a matter of changing weight and eating patterns. They used to eat too little (or too much) and weighed x, now they eat more (or less) and weigh x. The end. Much like the “body transformation” pictures often used on social media to document eating disorder recovery, this before-and-after snapshot oversimplifies the process involved.

When we say “recovery is process,” we mean a process much more complicated and ambiguous.

Recovery requires tremendous effort, persistence, patience, willingness, and support from family, friends, and professionals. It takes time. It may seem impossible. It’s feeling emotions once numbed by the disorder, and rebuilding a relationship with food, often from the ground up. It’s following recycled advice until you find something that works for you. Questioning thoughts and beliefs about body and food, and finding values separate from those of the eating disorder.

There are false starts. Dead ends. Repeated attempts. Crawling and stumbling and sweating along the way.

As Lovato’s story so powerfully shows, recovery is a process often filled with setbacks and victories big and small. It’s challenging and painful and rewarding.

That’s what makes it real.

If you are struggling at any stage of eating disorder recovery, help is available. Get started at The Emily Program by calling 1-888-364-5977.