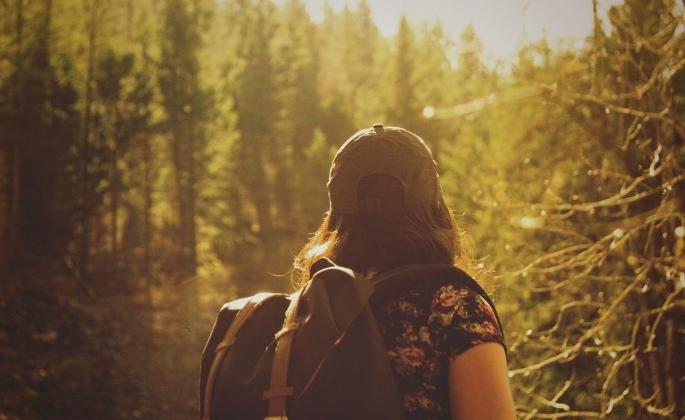 **Content warning: This is one person’s story. Everyone will have unique experiences on their path to recovery and beyond. Some stories may mention eating disorder thoughts, behaviors, and symptoms. Please use your discretion when reading and speak with your support system as needed.

When you are suffering with an eating disorder, you need support. Unfortunately, my mother and stepfather told me the eating disorder was a sin in my life, which caused more guilt and shame because I couldn’t fix it. If it was a sin, why couldn’t I stop? My father and stepmother never spoke to me about it. They obviously saw that I was struggling but never said one word. Not one of my four parents got me professional help, which is what I desperately needed.

The years of my eating disorder were some of the loneliest years of my life. It felt like I was going through life in a daze, just focused on doing my eating disorder perfectly. It sometimes did feel good to “win” at disordered behaviors. It felt good to be good at something. But for someone battling anorexia, no matter how much you lose, it’s never enough. In fact, the more you lose, the more the brain wants to lose. The more you lose, the more intense the thoughts get.

I felt like I was a “good” person if I didn’t eat and I was “bad” if I did eat. My mind started making up food rules that I had to follow if I wanted to feel good about myself, and if I broke them, I felt like I was a complete and utter failure. The rules had to do with what I was allowed to eat and what I wasn’t allowed to eat, as well as how much I was allowed to eat. I was so preoccupied with it. Again, I didn’t do any of this on purpose. I didn’t know what was happening to me. I didn’t choose any of this.  It’s like the thoughts just took over. All of the thoughts were overwhelming. I constantly “felt fat” and even though I was losing weight, it was never enough and there was such an intense fear of gaining.

With what I know now about how an eating disorder affects the brain, I’m amazed that I was able to keep up with my studies in college. I remember being SO tired at times and SO hungry when I was studying, but it wasn’t worth it to me to eat because it wasn’t worth all the feelings of guilt and shame that came with eating. I’d rather deal with the hunger pains.

While still in college, my family doctor referred me to a nutritionist who unfortunately taught me how to count calories. Never teach an eating disorder patient how to count calories. It simply becomes one of their rules. I continued to see her because I didn’t know what else to do; I needed someone to talk to and I didn’t know of any other professional help in the area. (Google wasn’t around back then!) I also didn’t know at the time that it was not good to be counting calories. I was just searching for support. I needed someone to talk to who wasn’t telling me it was a sin or something to be ashamed of.

An eating disorder takes over your life. You think you have control over it, but it really controls you. Everything revolves around the eating disorder. What am I allowed to eat? What time am I allowed to eat? Was I “good” today? Was I “bad” today? Do I need to make up for being “bad” today, tomorrow? The fear is so great that it can cause so much anxiety when eating out socially with friends. It can keep you from traveling because of the new and different foods and having to stick to your schedule. When I would travel, I would bring all of my own food. It was too scary to eat different food. Eating my own food on my own timetable would make me feel more secure.

I married my husband Matt in 2001, the year after we graduated from college. We had four kids in five years, and that was a nightmare for the eating disorder. Each time I would gain enough to get pregnant and then go too far when losing the baby weight. My weight would stay too low for a while and then I would force myself to gain the weight back, mostly because I wanted to take care of myself so that I could be a good mom to my kids. I had that motivation. Then I would get pregnant again. This cycle continued until after our fourth was born.

It was hard for Matt to see my weight drop so low over and over again. It caused him anxiety and he couldn’t focus on work at times. He sought out professional help for me and found a counselor in New York who had gone through an eating disorder herself and was now helping others. This was the first time that I had worked with a professional regarding the eating disorder other than the nutritionist that I had seen in college. Being long distance was not ideal, but she agreed to help me via email and phone calls.

I’m not so sure the counselor did a whole lot, but at least I could tell Matt that I was going. But thank God for the psychiatrist who put me on Lexapro right away. That was exactly what I needed. The medication slowed down the thought patterns enough for me to be able to manage the eating disorder. It’s not like the thoughts have gone away completely, but now I can tell them “NO” when they creep in and get on with my day happily. I’m so thankful that I can live in so much more freedom now.

I don’t know what good came out of me having an eating disorder other than I could understand when one of our children started struggling with one. At least I could lend an understanding ear and I knew to get them professional help right away. It was not an easy road and every eating disorder has its own individual factors. She was in and out of treatment centers and a children’s hospital for a good year, and there is a high chance for relapse as I know from my own experience.

My advice for those struggling

If you are struggling with an eating disorder, I have a few thoughts for you. First of all, if you haven’t gotten professional help, please do. The only way I have learned to fight the eating disorder is to counteract all those lies, all those voices, all those thoughts that run rampant with the TRUTH. It’s a hard battle but you can win it.

Secondly, you can be free of anorexia forever. Freedom looks different for everyone, but I believe it exists. There are people who experience even more freedom than I have and those who have not experienced as much, but the important piece is that there IS freedom. I’ve experienced it myself. I am a functioning human being who maintains a healthy weight. I can be in social gatherings where there is food. I can eat out with friends. I can enjoy food. I don’t restrict. I don’t feel the need to exercise. These are huge accomplishments, and I enjoy the freedom.

Lastly, you are not crazy. I know you feel like you are. All of those voices battling in your head are draining. I know you’re so tired of hearing them. Please remember the rest of your life is not determined by this moment. I know it feels like this is it, but it doesn’t have to be that way. You can have an amazing life filled with freedom, meaning, and purpose apart from the eating disorder. This is just part of your journey. It doesn’t define you.

Like I said, it hasn’t all gone away for me. I can’t not think about how my clothes fit every time I put them on. But I can move forward and enjoy my body and social situations with food. I’m happy with my body now and I don’t hate it anymore, and for that I am thankful.

This is a far cry from my dark days of measuring my food and letting the number on the scale determine my happiness. I am a functioning adult no longer ruled by my eating disorder.

Am I very aware that I could relapse at any time? Oh, yes. I don’t put myself above that, not ever. Anyone who has ever suffered from an eating disorder has to constantly protect themselves.

To read my full story of recovery from Lyme disease and my eating disorder, you can purchase my book, Though the Mountains Be Shaken on Amazon and Barnes & Noble.