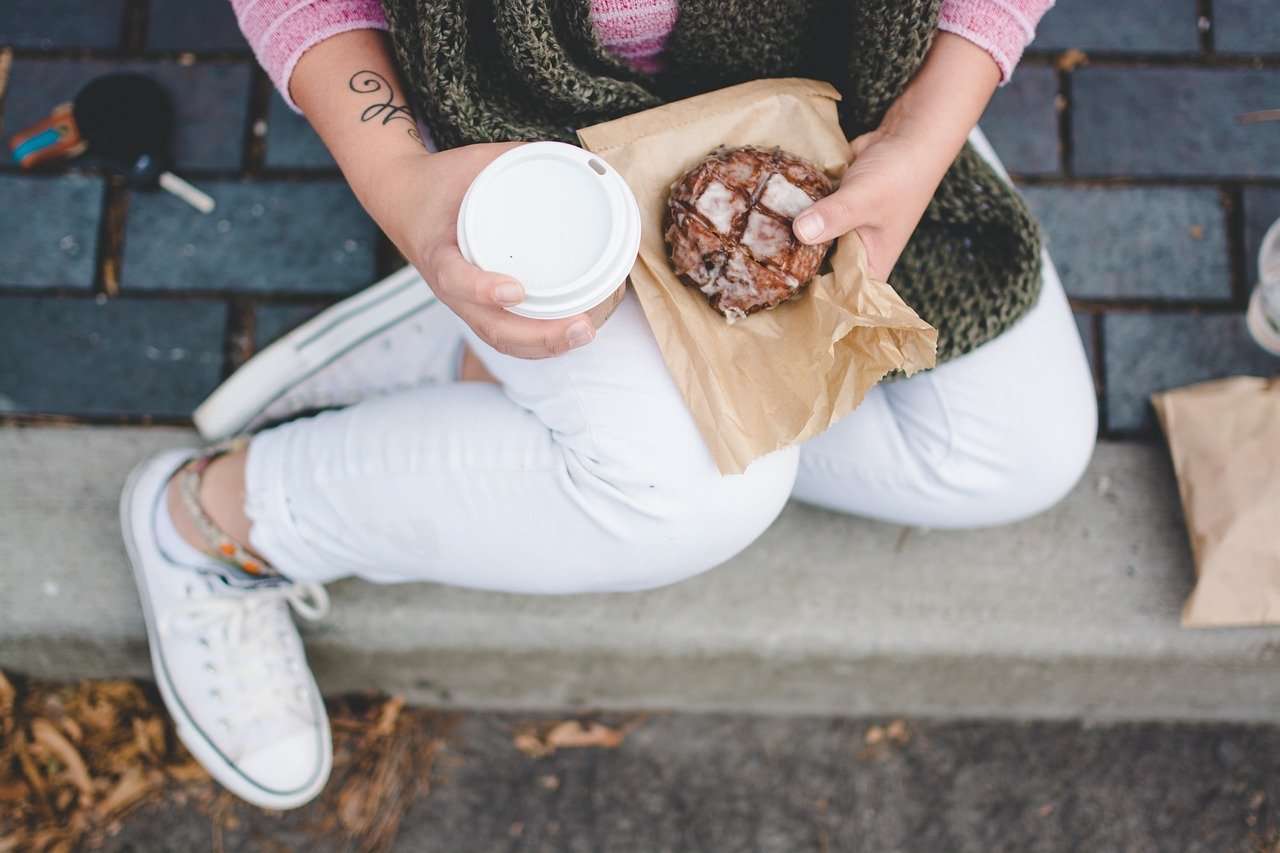 Food is a part of my brain and is always on my mind. In 2012, I was diagnosed with an eating disorder—compulsive overeating. I would sit in front of Netflix and eat bowls and bowls of Ramen noodles. I would also finish off an entire economy-sized bag of cereal in one sitting. I usually ate because I was burying a terrible feeling: loneliness. Sometimes I ate not because of loneliness, but out of boredom, or stress, or hatred for my body. I gained a lot of weight, but my eating was also a gradual decay of my spirit and my self-worth. I could never numb myself enough. I never became bulimic, but I did go through moments where I restricted food intentionally.

I had two very stressful moments in my life that greatly altered my natural eating patterns. The first was when I was coping with undiagnosed bipolar disorder. Some of the symptoms of this disorder were intense anxiety and panic attacks that I would get almost every day. When I was anxious, I found that it seemed to affect my mouth, tongue, and throat. I found it so hard to swallow food. I barely ate anything. I did not restrict food because I thought I was fat and desired to be attractive to men, as many suspect of people with eating disorders. It was part of my mental health symptoms. I was finally able to begin eating normally again when I started receiving treatment for anxiety. I did not know this at the time, but such rapid weight gain and weight loss damaged my liver and was the cause of the onset of NASH or Non-Alcoholic Steatohepatitis. This liver disease made my liver very fatty and induced scarring that is similar to cirrhosis of the liver.

The second stressful moment in my life was in 2007 when I went to South Korea to teach English. Just like during the pre-diagnosis period of bipolar disorder in 2002 when I couldn’t swallow, these same symptoms came back two months before heading off to Korea. At the time, I was on medication for psychosis and anxiety, but the fears and anxiety I had associated with Korea were far too strong. I was supposed to work in Korea for at least one year, but I had to leave after being there for two months because I was starving. My body had gone through yet another tumultuous traumatic event.

Upon return to the US, I was suddenly able to eat and swallow, and the anxiety dramatically lessened, but it took about one month for my body to accept more than just rice cakes and seaweed for a meal. It took about one year to gain back the weight I had lost. My eating patterns finally returned to a consistent intake after about two months upon returning to the US.

Then about a year later, I was beginning to gain more weight and I gradually began to feel out of control with my eating again. I would overeat and then feel excessively awful about myself. This is when, I believe, the cognitive and emotional struggles that people with eating disorders cope with finally came to the surface for me. I was forced into awareness so I could really examine my eating and deal with the original pain—the loneliness, and now, the shame. I began seeing a therapist at The Emily Program, and then was officially diagnosed with an eating disorder. I had a hard time with acceptance at first. I convinced myself I wasn’t like other people with eating disorders. But the program helped. After about a year and half later, I had overcome my eating disorder enough to feel like I could leave The Emily Program.

I still struggle with restricting food and overeating, although it comes and goes in cycles. It seems each year the cycles are getting smaller. But the feelings of emptiness and tendency toward self-destruction still depletes me. I find that at this point in my life, grazing, eating slowly, and listening to what kind of food my body prefers seems to work best for the balance and well-being of my eating disorder, liver disease, and bipolar disorder. I know I will swing back into patterns of self-shaming, and self-disgust, but those are to be expected by now and I know how to pull myself out of that slippery downward slope.

As a survivor of many things, my eating disorder is a constant reminder that I am human and I will never be perfect and free from all illness. In a way, I’m grateful to have had that depth of experience. Having some kind of illness or disorder teaches you about love—love from others who support you in your challenges, and ultimately, love you need to cultivate for yourself. In this case, the more I learn to love my body, the less tempted I am to destroy it. Each day is another chance to forgive my body and myself, and I look forward to every new morning.